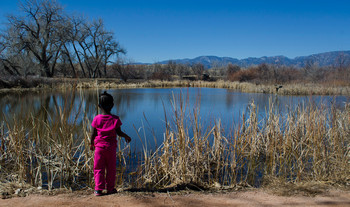 It was the early 1970s and I was 14 years old when I walked into a camera store on Tremont Avenue in the south Bronx to buy some film for my Kodak Instamatic Camera. I noticed a do-it-yourself development kit for $15 and I was immediately intrigued by the thought of developing and printing my own photos. It was only $15 but it may as well have been $1000. I simply didn't have any money and asking my mother for this money was strictly out of the question. We were barely making it with the basic necessities of life while living in the poorest congressional district in America. But I was a little hustler and I made money by taking out garbage for the residents of my apartment building and carrying groceries home for people that shopped in the supermarket.

Finally I made enough to buy the kit and I took it home with me. It was a very happy day. I read all of the directions and turned our little apartment kitchen into a darkroom. I noticed immediately that there were two drawbacks; only black & white film was developed and the photographs were printed, not enlarged, meaning that the photographs were the exact same size as the negative. But these were only minor drawbacks. That little kit taught me the process of developing film, mixing chemicals and the effect of light in the process. Later that year I worked with a man named Mr. Daily. He was an old guy in a wheelchair and he ran the darkroom at the local boys club. He was also one of the original Dead End Kids back in the 1930s. (If you know who they are, you are VERY old). Mr. Daily had all of the modern equipment and enlargers that furthered my expertise in the darkroom and helped me understand the creative process. My love for photography has grown ever since.